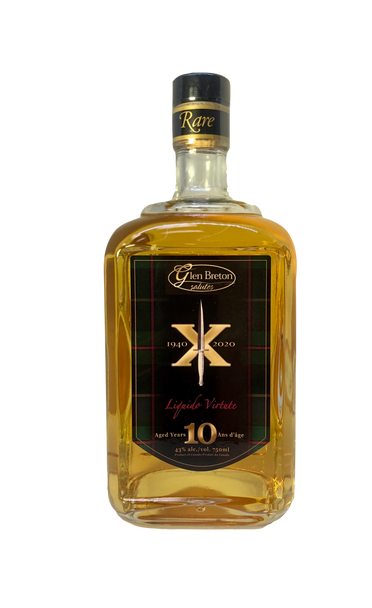 10 Year Old - 750ml- 43% Alc/vol. This whisky was created in conjunction with the SOE Anniversary committee. 2020 marks the 80th anniversary of the creation of the Special Operations Executive (SOE). The legendary SOE was created on July 22, 1940. It was a secret British WWII organization whose purpose was to conduct espionage, sabotage and reconnaissance in occupied Europe. Few people were aware of SOE's existence. Its agents were mainly tasked with sabotage and subversion behind enemy lines. The Canadian connection to the SOE was derived both in terms of the Canadian personnel recruited to serve and the contribution of a training establishment in the form of Camp X. The site of Camp X, situated on the shores of Lake Ontario, is designated as Intrepid Park and named after a key figure in the establishment of the SOE, Canadian Sir William Stephenson (code named "Intrepid"). The tartan on the box has been named after Sir William Stephenson and is aimed at honouring the legacy of the SOE and those who serve. Colours: tan pays homage to Canadian Special Operations Forces; green is a tribute to Canadian Intelligence; black signifies the history of covert operations; red signifies Canada and the sacrifice of the SOE; and blue pays tribute to the sky and sea which supports SOE operation. The SOE’s spirit of determination and selflessness lives on through its decendant intelligence and military organizations in Canada. Letter from SOE Anniversary Committee
View AllClose

MSRP:
Now: $34.99
Was: $38.00
Bottle Stoppers allow you to cork your bottle of whisky until you're ready for another glass or dram. We offer a choice of our signature tops an Angel, Thistle or a Pot Still. These are...