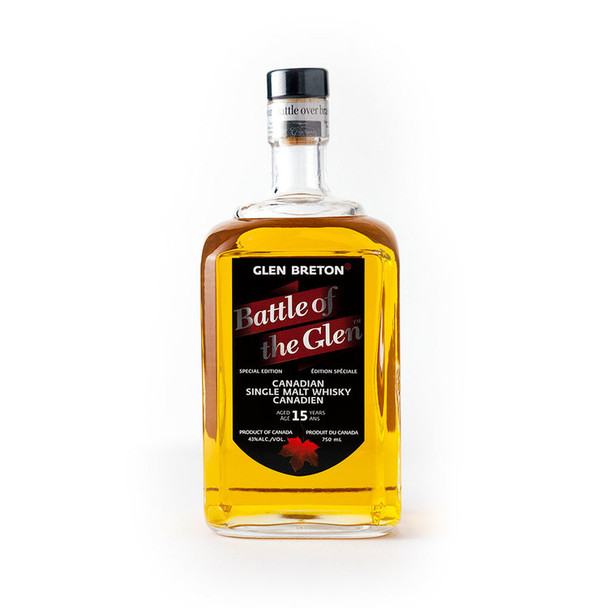 When the Scotch Whisky Association launched its law suit against Glenora Distillers in 2000, shortly after the release of its first bottling proudly called "Glen Breton Rare", a media frenzy soon followed in newspapers, magazines, and online newsletters, forums, and blogs.  North America's only Single Malt Whisky distillery was a hot topic amongst the whisky and local cultural communities.

Upon victory in the summer of 2009 it was decided to dedicate a bottling to celebrate this epic battle so fittingly called the "Battle of the Glen.”

Colour: A rare dissolution of gold - at break of dawn, the first brushing of the sun upon the snow-covered lakes of the Bras d’Or;

Nose: Subtle, summer-cut applewood, with undertones of Highland honey; Taste Taking by surprise, come the waves of malt, powerful, but without overbearing, then a complex orchard of flavour;

Balance: The play between lightness of the whisky and the strength of the malt is a work of harmony and mystery.

MSRP:
Now: $45.00
Was:
Presented in a luxurious gift box. Just one drop of water can change the composition of your whisky, so if you like a wee drop in your dram, this is the perfect tool for you. The hand crafted whisky...

MSRP:
Now: $10.99 - $11.99
Was:
This streamlined dropper still uses the same principals as our more decorative Whisky Water Dropper and is made by the same Angels' Share glassblowers but is lower in price and therefore more...

MSRP:
Now: $6.00
Was:
Whisky related greeting card, printed and pressed individually by a Nova Scotia artist especially for Glen Breton. These cards have our Glen Breton logo on the back and are blank inside. We can fill...

MSRP:
Now: $86.96
Was:
10 Year Old - 750ml- 43% Alc/vol. This whisky was created in conjunction with the SOE Anniversary committee. 2020 marks the 80th anniversary of the creation of the Special Operations Executive...